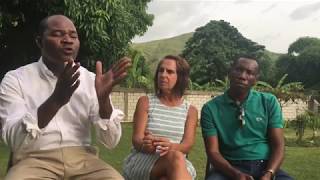 This June's clinic saw over 1,400 men, women and children with seasoned volunteers, as well as, a few new additions to the team. Heidi Dugent, a busy stay at home mom and self-employed face painter. She joined this trip working and keeping the pharmacy organized and well stocked for each clinic day. Erin Frye, an Emergency Room nurse at Bon Secours Saint Mary's Hospital, brought a plethora of knowledge to the team with her quick critical thinking. Katie Gagnon, a Pediatric Nurse Practitioner brings expertise in the fields of pediatric intensive care units, urgent care, primary care, and currently specializing in pediatric gastrointestinal within the Children's Hospital at VCU Medical Center. The team also consisted of many veteran volunteers including none other than, Kathy Faw RN, Debbie Burcham RN, Anna Giotta RN, Kelly Strickler RN, Kristin Blum RN, Kendall Plummer RN, and Mack Gagnon, all affiliated with the Bon Secours Memorial College of Nursing. The team would not of been able to do their great work without the translators that joined them. This trip's translators included Pastor Frank, Pastor Bigor, Thimotee, Wadner, Elifete, Cheles, Tony, and Dee.

The day the team arrived in Haiti, the streets were lined with Haitians decked out in Brazil colors to support their favorite World Cup Soccer team. Radios and a few televisions were giving the play by play of the soccer matches, and every time a goal was scored you could hear cheers from all around Haiti. The sound of the rain could not drown out the excitement of the Haitian people.

When the team finally arrived at the Louise Mulligan Mission House, a two hour drive from the airport, they were exhausted from the full day of travel. However, work needed to be done and medications needed to be organized for the coming clinic days. By the time the team finished preparation for the next day, they were all exhausted but excited for their first day of clinic at the Voice of Victory Church.

This mobile clinic kicked off on a Friday which was market day in Haiti. This means that not as many people showed up due to this being a very important money making day for the Haitian people. The team still saw over 250 people that day.

The second day of clinic was still at Voice of Victory church but with double the amount of people seen. The team saw almost 500 patients that day and worked tirelessly to make sure that everyone was seen and all of their needs were addressed. The team was exhausted by the end of the day but they perked up for some dancing and cultural immersion at Yamilee's Cafe.

Sunday had arrived and the team had the day off and attended church at the Voice of Victory in Domond. The team was given impassioned sermons by Pastor Frank and Pastor Samuel and enjoyed music played and sung by the church members. When church ended, work began, as the mission house needed some TLC and 13 new solar panel lights needed to be installed along the property walls. The team also needed to sort more medications for the upcoming mobile clinic days at Wadner's home.

Wadner's home was the site of the last two clinic days where the team saw 350 patients both days. The Wadner family surprised the team with coconuts when they arrived and also cooked up a delicious lunch both days for the team. Wadner's community welcomed the team with open arms and accepted the team into their hearts.

This June team sacrificed their own time and money in order to help service these communities in Haiti and everyone of them would do it again. It is with the continued support of their family, friends, and the Haitian people that the Patricia Sullivan Haitian Outreach Foundation is able to give medical support to those who would otherwise receive none. These Haitian people wait for the team's return several times a year to receive the care and medications that they need. Many of the people that are seen have blood pressures more than 100 points than normal ranges and rely on the medications provided by the team. This level of blood pressure puts the patient at risk for great many complications, including stroke. That is why it is important that the Patricia Sullivan Haitian Outreach Foundation continues their work in Haiti, to continue supporting our friends and family that we have built relationships with.